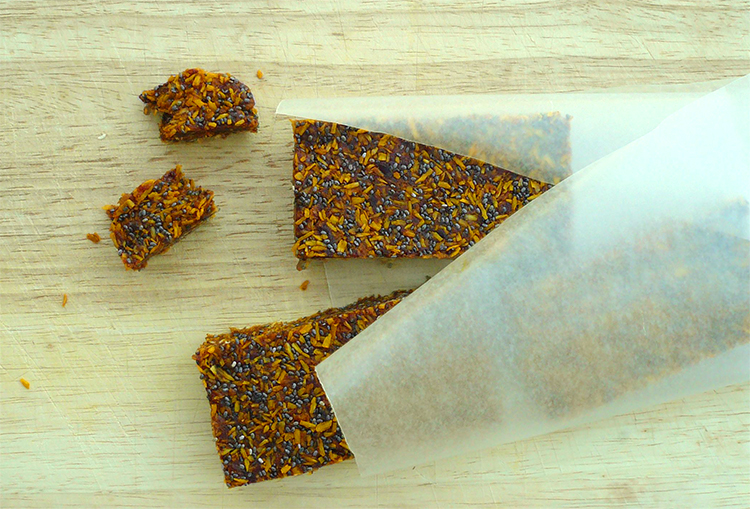 Superfoods and raw energy bars make me happy. So why not make a raw superfood energy bar?

This is the red version of my green Raw Hemp Algae Bars, because playing with color in food is fun! These get their amazing reddish hue from a combination of red palm oil–which I’ve been using in everything these days–and sea-buckthorn powder. “Sea what?” Yes, sea-buckthorn powder, which was gifted to me by the amazing Diana from Paleohavetus all the way from Estonia! I sent her some coconut manna and she sent me sea-buckthorn powder and hawthorn berry flour, which I made in a Paleo Chocolate Hawthorn Cake. We were paired during the September Paleo Pen Pals swap and had lots of fun.

The health benefits of sea-buckthorn powder are truly amazing. I’ve never seen it available in the States; if you can get your hands on some, you’re lucky. The powder is made from berries, and apparently, these berries have been known as a superfood for millennia by millions of people… yet I had no idea. The ancient Greeks knew and used the berry as did the various populations in and around the Himalayan Mountains. There are too many health benefits to list here but suffice to say it is useful in treating such ailments as arthritis, gastrointestinal ulcers, gout, skin rashes, high blood pressure, and poor eyesight. It’s also used in the cosmetic industry in anti-aging products!

Combined with the beneficial effects of chia, coconut, and bee pollen, these bars knock the nutrition ball out of the park and are tasty to boot.

These raw energy bars are packed with superfoods: chia, sea-buckthorn, and bee pollen!

The red palm oil heightens the hue, but can stain utensils and color your hands. Coconut oil can be subbed instead.