We need to talk about pea milk. Because a new non-dairy milk substitute made from yellow peas hit the grocery store shelves 15 days ago and while I didn’t sit down this morning with the intention of writing a pea milk review before day’s end, the product piqued my interest so much when it crossed my radar that I researched it and taste-tested it myself as soon as possible. Although the plant-based/non-dairy milk category might appear already saturated, pea milk has some dietary and environmental benefits—in addition to an origin story worth hearing—which may ensure its widespread traction. Read on for details! 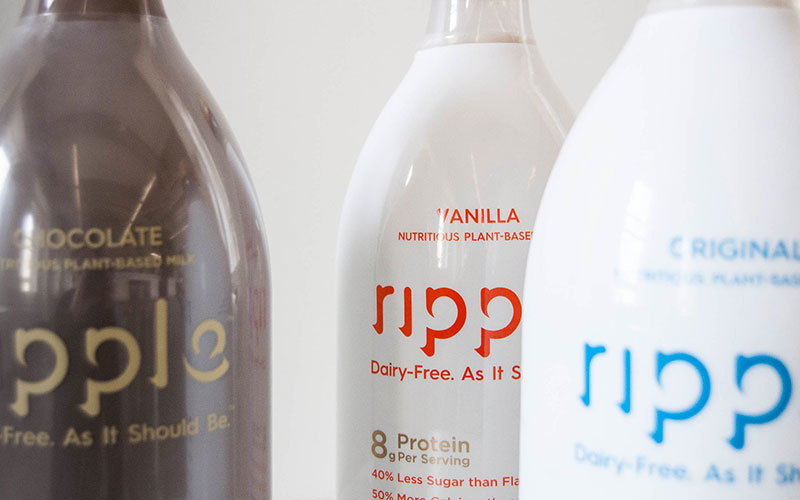 First things first: in case you were concerned about the reaction once you begin ordering “pea milk lattes” at your favorite coffee shop (and you might, after this review!), rest assured that the pea milk’s marketing team has this well in hand, and the stuff is waiting for you in your local Whole Foods dairy case by the much more appetizing name of Ripple. “Ripple” is explained in the company’s tagline of “When you drink Ripple, the positive impacts ripple through our world. Call it the Ripple Effect.” What is the ripple effect that they’re riffing on? The positive environmental effect of consuming a more sustainable crop (yellow peas require very little water to grow and process). Ripple reports:

[bctt tweet=”Hopefully almond milk drinkers will switch to Ripple, for the sake of California’s drought…” username=”grokgrub”]

According to the company’s website, there’s more to love about Ripple on the topic of reducing your consumption’s carbon footprint. Let’s take a deeper look (and also evaluate the product from a few additional important angles such as taste, healthiness, price and availability)!

Sustainability: In addition to savings on water consumption, peas apparently produce 70% fewer greenhouse gases than almonds, and 76% fewer greenhouse gases than dairy milk. Ripple packaging is recycled plastic and has a carbon footprint that’s 75 -80% lower than standard milk cartons. All ingredients in Ripple are GMO-free. Check, check, check. The only note of discord in Ripple’s sustainability symphony is that Ripple’s peas are sourced from France. Unknown if or when this will change to a domestic source.

Taste: Ripple’s flavors are original, unsweetened original (thank you), chocolate, and vanilla. It doesn’t taste at all like peas. Do I need to repeat myself? Ripple tastes nothing like peas. How does it stack up against other choices? In my opinion, it’s very similar in flavor to unsweetened soy milk or almond milk, although creamier (compared to what I distantly remember of soy milk). It’s mild in flavor but enjoyable in texture, and more satisfying than regrettable low-fat or skim milk. As compared to coconut milk, since I personally have issues with the way coconut milk tastes, I use it only in baking (or heavily camouflaged with spices in a curry, or fruit in a smoothie bowl) rather than straight from the carton or can. In summary, I was pleasantly surprised by the taste and texture of the original unsweetened flavor—I did not sample the other flavors that contain added sugar—and pouring myself a glass is something I look forward to. [bctt tweet=” Only the subtle sweetness and creaminess of full-fat dairy surpasses Ripple, in my opinion.” username=”grokgrub”] 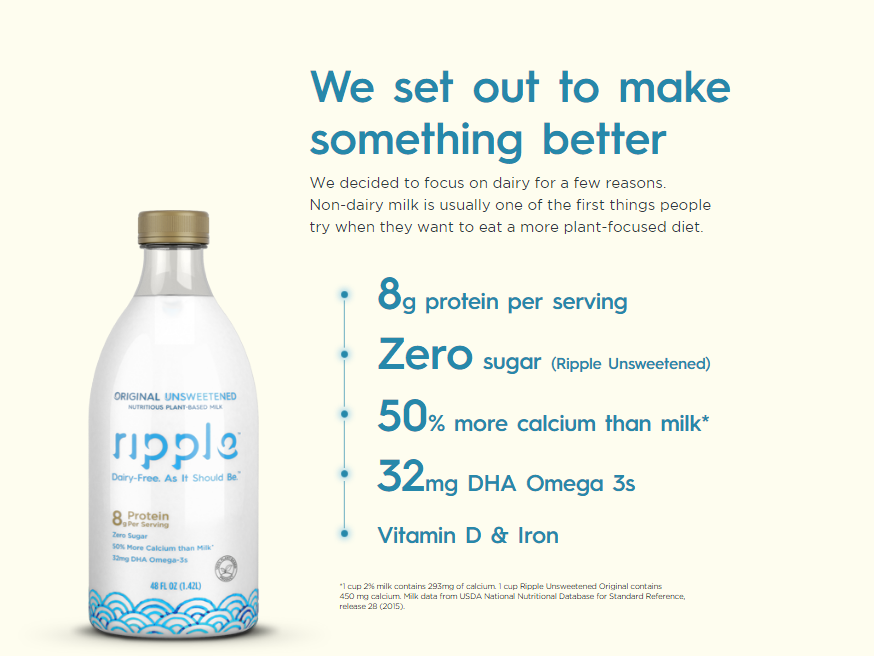 Healthiness: Ripple touts the fact that it contains half the sugar of 2% cow’s milk, and that it contains 8 grams of protein per glass, the exact same amount as cow’s milk and eight times the amount in almond milk, but if you assumed that the only ingredient in Ripple was peas, you may be surprised that the ingredient list is significantly longer. Ripples ingredients are pea protein, organic sunflower oil, algal oil, vitamins, and minerals. Let’s break this down:

Price and Availability: Ripple arrived in Whole Foods earlier this month, and will be on Target shelves in July.  Note: I accessed the store locator on Ripple’s site and followed its directions to my nearest Whole Foods, only to be disappointed to discover that Ripple was not in stock. I subsequently found it at the same Whole Foods location a few days later, but in my opinion it’s best to call ahead. Ripple retails for $4.99 for a 48-ounce bottle.

My personal verdict: I’m fascinated by the sustainability potential if Ripple gains mainstream traction. Since I habitually avoid seed oils, however, I’ll be enjoying Ripple in moderation (such as in my vegan Blackberry Banana Nice Cream)! Speaking of the Blackberry Nice Cream… what is it? “Nice cream” is a frozen treat very similar to ice cream that requires only the use of a food processor (no ice cream maker required!) and that uses bananas as sweetener and to achieve a creamy texture. Even though it’s dairy-free, I don’t make nice cream very often because I’d eat it bowl after bowl! Like any treat, it’s best reserved for special occasions rather than as an every day indulgence. 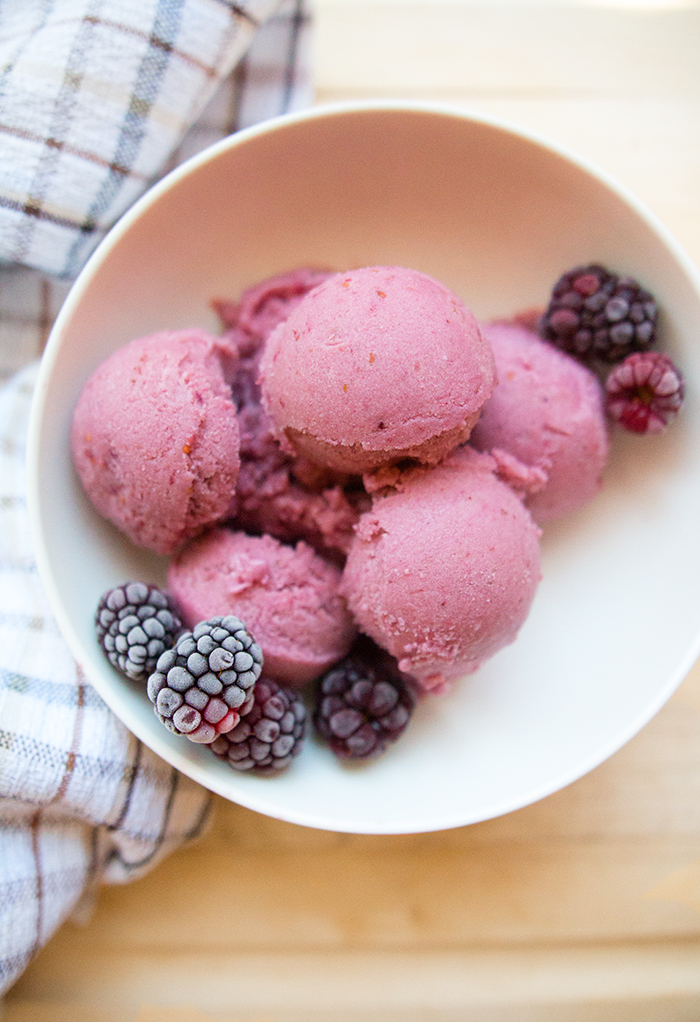 Just make sure to keep some bananas and berries stashed in your freezer, and you’ll be able to whip up this Vegan Blackberry Banana Ice Cream in minutes. 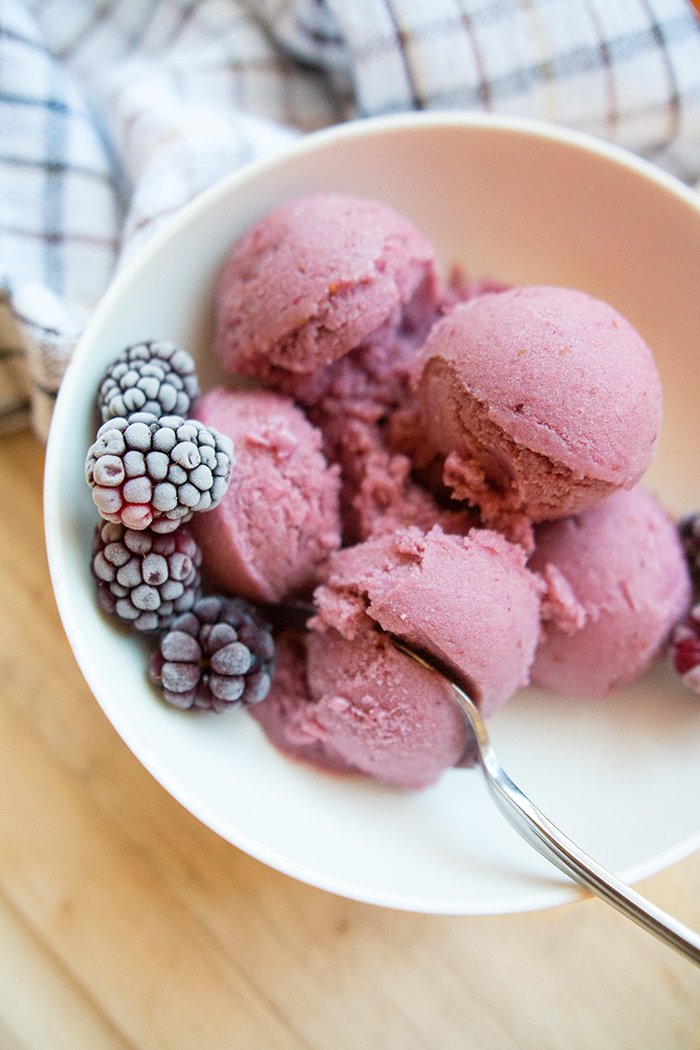 Vegan Blackberry Banana Nice Cream
Recipe Type: Dessert
Author: Fresh Planet Flavor
Ingredients
Instructions
Notes
The nice cream can be enjoyed with soft-serve texture straight out of the food processor, or hardened in the freezer for minimum 8 hours to achieve a crisper texture (as seen in the photos). In that case, be sure to allow the nice cream to thaw for a few minutes before attempting to scoop and serve.
3.5.3208