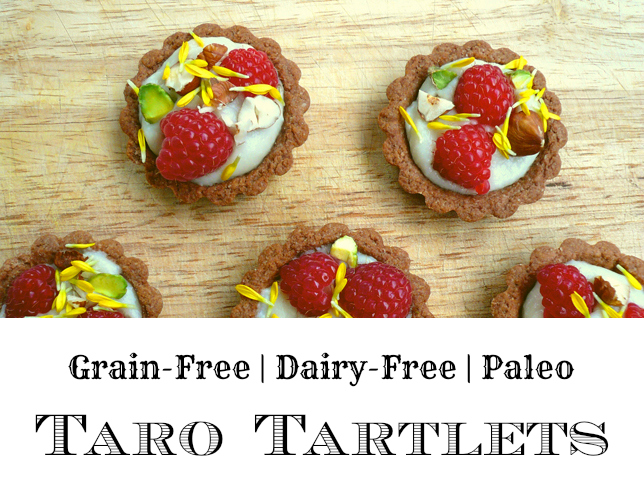 I’m having a great time with the Paleo Pen Pals monthly challenge: in February I created Black Garlic Chocolate Donuts with the gooey, salty, tangy Korean black garlic sent by Brittanie of Three Diets. One Dinner and this month I made taro tartlets with the package sent by Tanya from Feed the Clan!

Taro is the common name for a family of tropical tubers. They’re small (approximately the size of my closed fist), brown and…hairy. Odd-looking, compared to common root vegetables such as white potatoes, yams and turnips. Another twist is that they are inedible when raw and even considered toxic! This toxicity is neutralized by thorough cooking, however, which Tanya made sure to explain in a note included in the package. This aspect plus their appearance was a large part of the fun, as was the idea of making something as cheerful and twee as these tartlets out of a dusty, semi-poisonous product of the soil. The joke is that while the taro might be dismissed as the white potato’s unfriendly, ugly-duckling relative at first glance, taro is actually far more vitamin-rich, higher in fiber and lower in calories than the potato. A last fact for the nutrition nerds: taro affects blood sugar levels much more gradually and gently after ingestion than potatoes, also. 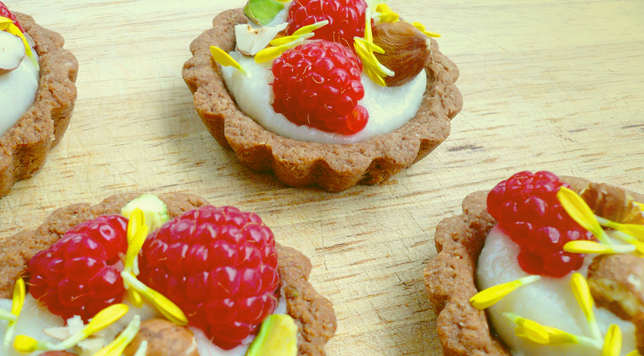 This recipe can be divided into the three steps of 1. filling, 2. crust, 3. assembly and accomplished over the course of several days as I did. If I make these again I’ll attempt the entire process at one time, however, since each of the steps turned out to be more manageable and less time-consuming than anticipated!

Taro Tartlets
Author: Fresh Planet Flavor
These tiny taro tartlets would be a hit at a bridal shower, brunch or any occasion for festive finger food.
Ingredients
Instructions
Notes
Be sure to boil the taro thoroughly to neutralize toxicity!
3.3.3077
TAGS:crustdairy freegluten freegrain freepaleotarotartletsvegetarian