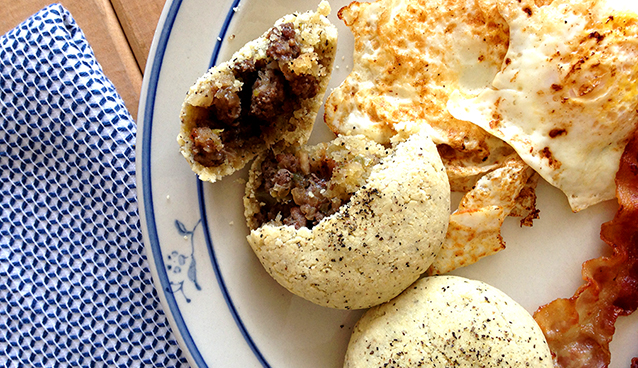 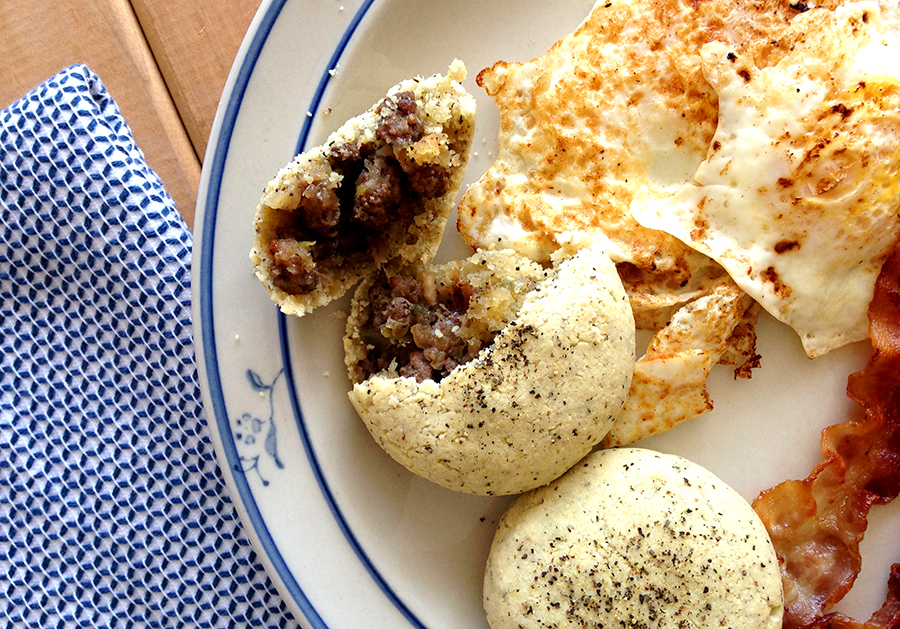 I flipped through this month’s issue of Bon Appétit (such luscious photography that I’m getting hungry just remembering it) and a single line from a Father’s Day feature stuck in my head. The author of the piece was describing what he’ll be doing with his daughters on his day of honor, and among other things, eating “biscuits stuffed with Jimmy Dean sausage (judge away!) slathered in honey”. Say what? I immediately decided I’d have to recreate this decadent scenario, with tweaks to my own taste. No Jimmy Dean sausage, for starters. Maybe a high-quality gluten-free sausage? No, the fat would probably crack the biscuit open and run everywhere on the baking sheet as it rendered inside while baking. A lean meat… but nothing so un-fun as ground chicken… Bison! Lean yet delicious and somewhat readily available from specialty grocery store. I moved on to the question of a grain-free biscuit.

I used a Paleo biscuit recipe from Paleo Comfort Foods in my Paleo Chicken and Biscuit recipe, but I knew I’d need something less crumbly, with more elasticity if I intended to stretch it around a meat filling and have it hold its shape when pinched shut. The answer? Paleo Spirit’s Paleo Dinner Rolls (which I adapted away from the original by adding black pepper, changing the ratio of coconut flour to arrowroot flour and subbing coconut oil for olive oil). Apologies for the finicky coconut flour measurement… but it’s important to get the balance of coconut flour to wet ingredients just right! I also rolled my biscuit dough out between two sheets of plastic wrap (no mess and imprecision from flouring your hands with arrowroot) because it makes the biscuits very uniform but it was would be much easier and work almost as well to simply press the dough into approximately round disks with your palm before filling with the meat mixture. Your choice!

One last thing to note: the purpose of sautéing the filling before stuffing the biscuits is to cook off the fat from the meat and the water from the vegetables. However, you can skip this step if presentation isn’t of paramount important, and you don’t mind a bit of fat cracking the biscuits and seeping out. I made these both ways (with the filling raw going in and pre-cooked) and while the pre-cooked version is the one in this post’s photos, there’s something decadent about the flavor of the biscuits when they’re soaked in bacon fat as the raw filling cooks in the oven. If you’re pressed for time? Raw version, all the way. 🙂

The only imperfect thing about these biscuits is that I won’t be baking them for my Dad this Father’s Day. He’s back in Texas with the rest of my family, but I’ll be sending good vibes his way and this biscuit recipe will still be here next year!

Rachel Marion I flipped through this month’s issue of Bon Appétit (such luscious photography that I’m getting hungry just remembering it) and a single line from a Father’s Day feature stuck in my head. The author of the piece was describing what he’ll be doing with his daughters on his day of honor, and among other things, eating “biscuits […] Breakfast Bison-Stuffed Black Pepper Biscuits European Print This
Serves: 12 Prep Time: 1 hour Cooking Time: 45 minutes 45 minutes
Nutrition facts: 200 calories 20 grams fat
Rating: 5.0/5 ( 1 voted )